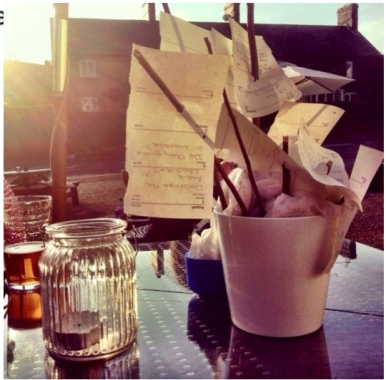 The book:
The P45 Diaries by Ben Hatch
This book is a semi-autobiographical account of the protagonist’s coming of age, following his journey as he gets sacked from a number of jobs from working in a kebab house where he didn’t realise he had to take the skewer out of the chicken before putting it in a pitta, and various others, including macdonalds, and a stint with a builder. As funny as it is to read about his blaze of glory exits from the workplace, there is the undercurrent of him dealing with the bereavement following the death of his mother, and the consequently tumultuous relationship with his father who is the Head of BBC 2 and desperately trying to get his son to hold down a job.  Another main theme is his rejection of the corporate world and his inability to embrace maturity, so when the ending sees him being accepted onto a journalism course the reader is relieved to witness this first step towards some stability in his life and his entrance into adulthood.

We loved….
The humour and change in style from some of the ‘heavier’ books we have been reading, and the way that the book managed to tackle some really heavy issues such as bereavement, the deterioration of someone before death, while making us laugh out loud. There was a refreshing mix of humour, honesty, and seriousness. We also loved the al fresco setting, and michelle’s epic diary style question tree (see photo!), complete with Welsh cakes! A hard act to follow for next month but I’m sure she will.

We didn’t love….
that Michelle got stuck in traffic and was late and that we were actually going to have to think of something to say unprompted! Also, a few of us thought that perhaps the humour was a little forced in places, especially the beginning, until it became a bit meatier.

We disagreed….
about very much this time. On the whole we all enjoyed it, and everyone who finished it said that they did not expect the ending.

We digressed….
and talked about the difference between bronchitis and pleurisy. We obviously missed the last couple of months’ medicinal themes and wanted to give our brains a workout. Thanks to Robin, our resident microbiologist, we learnt a lot about lungs. We also talked about the possibility of branching out and going to the cinema to watch the film adaptations of books we have read. This led to a discussion about the release of 50 Shades of Grey as a film, and there seems to be more demand for Mansel to reinstate his weekly readings from the book.

Reading Between the Wines

Reading Between the Wines